A while ago, I wrote about how I needed to replace a damaged wheel on my bicycle, and in doing so went completely off the rails and re-built my wheelset as tubulars. 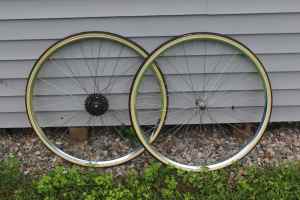 I, for one, have never embraced the modern world. I’m not Going Gently Into That Good 21st Century.

I have never been modern, so I’m not choosing to undo progress I’ve already made.

Every time I write one of these essays, I am wracked with guilt that it’s so easy to get my ideas out there. I certainly have not earned the right to be heard by convincing a publisher to back me, the way a Thomas Paine did, for example. “So what?” you’re saying. “That’s just semantic. Admit what you really are.” Well, maybe, but I hope to convince you that I often make objects because a suitable commercial version does not exist, and sometimes what I make can actually be better than what I can buy.

Ever since I was nine years old and Voyager arrived at Jupiter, sending back its stunning close-up images, I have been an avid amateur astronomer. My father had received the iconic Criterion RV-6 Dynascope for his high school graduation, and it was the first instrument through which I looked at celestial objects.

Still, I wanted my own telescope, and I devoured every book I could find in our local library about telescopes and how they worked. I was not a hipster; I just had no money to buy one. In my mind, it was easy: I’ll just ask my eye doctor for spare lenses he’s not using

and glue them onto a cardboard roll from paper towels.

This plan never came to fruition.

Mostly I used binoculars for stargazing, and I’m glad I did, because it taught me to find objects in the wide expanse of the sky and really study them to see what I could see. When I finally began working at a summer job (more on that in the future), I did not spend money on a car or driving. I gave in and bought myself a tiny Tasco refractor on a flimsy tripod with a useless finder scope. You know the kind: they appear in every department store around Christmas and have done more to frustrate and discourage generations of would-be astronomers than all the cloudy nights in history. But I’m glad for this, too, because it taught me the importance of a solid mount (more important than first-class optics) and the limitations of a small aperture.

Before I went off to college, I once again gave in and bought a much larger telescope, an Odyssey 10″ Dobsonian.

(That’s mine, third from the top.)

“Come on,” I can hear you saying. “I though this was about building things by hand.” Be patient, dear reader. The critical connection is coming shortly.

For a whole bunch of reasons that still haunt me, I had to leave the Odyssey behind at college. [That was shorter than you expected, eh?] But now that I was no  longer under my parents’ roof, I did not have to listen to their fears that making things was, at best, disappointing and, at worst, dangerous. (!) Thanks to Al Gore and his new-fangled Internet, I found THE BEST STORE ON EARTH, Surplus Shack. Now called Surplus Shed, it sells surplus optics, electronics, and all sorts of other goodies for do-it-yourselfers. [If you’re ever in east-central Pennsylvania on a Saturday, stop in and say hello. It’s one of my top five favorite places I’ve ever visited.] I bought a 4 1/2″ diameter overhead projector lens from them and actually made a telescope out of PVC pipe for myself at the age of 27.

The nearly-two-decade wait is not the point.  I surmised before I bought the lens, and had this confirmed by its performance, that it was designed to do far more than what I was asking it to do as a telescope objective lens. It performed as well as multi-element telescopes costing hundreds of dollars. So I was only a little disheartened when I ruined it.

Yes, my parents did have somewhat of a point. I was attempting to disassemble the whole thing to give the optical elements a thorough cleaning when one of them jammed sideways in the metal housing. Before I could free it, a chunk extending a third of the way across the lens had broken off, rendering the whole thing useless. But [wait for it] I’m glad this happened, because it taught me about how to handle complex systems of lenses, and it made me re-visit Surplus Shack, where I found this beauty: 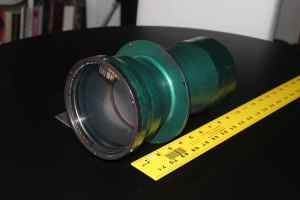 Look at the size of that thing.

(Those are inches, not centimeters.)

It contains a series of lenses extending all the way to the rear, making its weight 19 pounds. 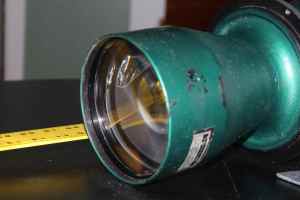 Because of its mass, I needed to build a sturdy mount, so I made a sawhorse minus one set of legs with a 4×4 as the main axis, and iron pipe fittings to support the scope.

The lens was made by Perkin-Elmer for the aerial reconnaissance camera on the F-4 Phantom, and probably originally cost you, the taxpayers, tens of thousands of dollars. No lens made by any commercial telescope manufacturer was ever made to that kind of standard. That flange bolted it into place under the wing or the fuselage. Who knows- this lens may have taken the photo that alerted President Kennedy that there were Soviet missiles in Cuba.

I painted it green because I have always wanted a green telescope. The focal length is so short (18″) that I simply bolted a focuser and eyepiece onto the back. It needed no tube. For ten years, this

was my porthole into space. It guided me through two successful Messier marathons, showed me minute details on Mars during its oppositions, and spied objects it really should not have been able to, like the Veil Nebula in Cygnus.  So why is it sitting on my library table now?

Because I’m an adult and, as such, I can revisit my childhood dreams. Back when I was in grammar school and dreaming of one day making telescopes, I obtained a catalogue from the A. Jaegers Optical Corporation.  Check out the 6″ lenses on page 39. The version here is from the 1960s, so mine was probably twenty years later. I think the 6″ cost $275 then. That was so far out of my reach as a ten-year-old that they might as well have said a million dollars. I never even said, “Someday…”

But someday arrived nonetheless. A few years ago, Surplus Shed acquired all of the remaining Jaegers back stock long after the latter had gone out of business. [Did I mention Surplus Shed is the BEST STORE ON EARTH?] Now I could own the lens I had always craved but never dared hope for. I bought it, and this

is the telescope I built from it. All of the structural parts are made from PVC plumbing pipe because it is relatively inexpensive, easy to cut and work, and incredibly durable.

So, is it better than commercially-available 6″ telescopes? Well, if you read any discussions of Jaegers lenses on line, most people say they are sub-par, and even cheap 6″ lenses from China outperform them today. Indeed, when I first used this telescope, I was somewhat disappointed by the image quality. In my mind, I blamed the astonishing views my Perkin-Elmer lens had given for spoiling me. But still, a 6″ lens collects almost twice as much light as a 4 1/2″, and this scope yielded 2 2/3 as much magnification with any given eyepiece, so I wanted to see how much performance I could tease out of it.

I began to think about the parameters that were within my control. One was the steadiness of the mount, but mine was solid as a rock because my previous telescope had weighed so much. Another was collimation, the adjustment of the optical elements to be precisely aligned with each other. A third was the amount of atmospheric moisture condensing on the 28 1/4 square inches of glass my lens presented to the sky. I had nothing to lose, so I thought and designed, drilled some holes, and made the tilt of the lens adjustable with three spring-loaded bolts mounted around its edge.

If you look closely, you can also see a ring of electrical-taped resistors between the lens and the plastic. The parts cost me less than $2 for this, as I had pulled the orange plug off of some other ruined appliance  in the past. [I’m glad I tend to save things. Did I ever mention that I’m the world’s cheapest human being?] Inside a dew shield made from a disposable paper paint bucket, this 50 ohms of resistance creates just enough heat to keep the lens frost-free and crystal clear in just about any conditions.

Now, these features are great to have, but so far they are not uncommon, only much cheaper than if I had bought an adjustable lens cell and dew heater. These improved the image, but I still was not satisfied. I realized that there was one more optical element that might need adjusting, and that was the star diagonal.

Rather than look straight up through a refracting telescope, most people prefer to insert a prism or mirror into the optical train to place the eyepiece at a comfortable angle. The result is seeing up by looking down, pacing the observer in much the same position that you remember from the microscopes in your high school biology class. My mirror diagonal was an inexpensive one because I had not thought carefully enough about it when I built my telescope.

The housing containing the mirror is thin plastic, and , stupidly, I would sometimes point the whole telescope by pulling or pushing on this part. This meant that it was not only wildly out-of -alignment, but also aligned differently depending on how I had handled it.

I managed to bring it into approximate collimation by shimming the housing with bits of card stock,

But I was not pleased by this solution. “Maybe I can make something better,” I thought. Returning to the drawing board and then to my local home improvement store for more PVC, I eventually designed and made my own collimatable diagonal mirror. [Just see how easy that is to find among commercial products.]

The front end of the wooden dowel is cut to a 45 degree angle, and the mirror cemented to it. I can precisely adjust the tilt via the three white screws around the outside.

The result? This was the missing piece of the puzzle. I am never disappointed by what I see through the eyepiece. Because I made so many of the components myself, with the advantage of hindsight regarding previous projects (and mistakes), I now have exactly what I want.

Actually, I have exactly what I have wanted since the Jimmy Carter was president.