Back when Al Gore had just invented the Internet (remember how he called it the “Information Superhighway” before he decided that nobody should drive cars?), pundits extolled its potential virtues constantly. In those heady days, they made pronouncements eerily reminiscent of the early stages of television: it will bring the contents of every library in the world into everyone’s home; it will give us access to museum collections the world over without leaving our homes; it will allow people to travel virtually to places they never could go. They did not foresee, but knowing Americans they could have foreseen, that the Internet would excel at two things: shopping for toys and shopping for pornography. On-line dating, of course, simply combines the two. These must have been the same prescient souls who predicted that the horseless carriage would solve the pollution crisis in cities. 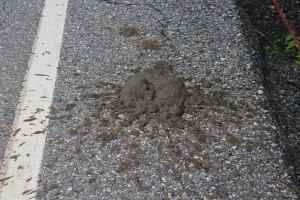 (“Be careful of your new high-button shoes, Chester.”)

Anyway, I heard these predictions about the Internet and thought, “This is horrible. Nobody will visit the Grand Canyon any more. They’ll just look at pictures of it on their computers.”

Almost immediately, I realized, “What am I saying? This is GREAT! Nobody will visit the Grand Canyon any more.” No more lazy slobs who just want to drive right up to a natural wonder in their air-conditioned land yachts and experience nature by riding in a tram car instead of taking a challenging hike. (Did you know that there are plans to build a cable car in the Grand Canyon?) No more people who would push you out of the way to take a picture on the way to the fast food and then toss their litter beside the trail. I’ll have the place to myself!

Of course, my Utopia did not come to pass, but I’m sure that virtual tours are saving some wear, tear, and vandalism on natural and man-made treasures around the world. This past Sunday, though, I experienced something that made me re-visit the dreams of my earlier years.

As un-American as this seems, I have absolutely no interest in football, midget, Pop Warner, high school, college, or professional (or European, for that matter).

I don’t care for the week-long buildup for a single game. I don’t care for the pre-game, halftime, and post-game analyses by retired players who need to feel relevant. I don’t care for the endless personnel changes punctuated by short bursts of violent game action. I don’t care for the legions of fans who believe they know better than coaches and general managers, and play in “fantasy leagues” in order to feel smug. But, most of all, I don’t care for something that would consume my entire Sunday sitting inside in front of a screen, dragging on late into the night while I desperately searched for a way to prolong the onset of the new week.

I can say this because I am a recovering football watcher. I have been clean for twenty-seven years now (I went off to college before it was a Club Med, and so I had no television for four years). I just take it one weekend at a time. But I cannot help but look back on my life from age 8 to age 18 and think of how many beautiful Fall days I’ll never get back because I was afraid to miss a single play of a televised football game.

It was the first weekend of Autumn, 70 degrees, gently breezy, dry, and sunny.

I just had to spend the day outside. You don’t see colors or breathe air like that every day.

Knowing winter would be here all too soon, I headed out for a bike ride. I felt free and easy, like I was flying, but I was not going any faster than usual. I could not put my finger on why it felt so good until I approached a green light

that STAYED GREEN while I approached and crossed under. No cars waiting to pull out from the side streets. In fact, there was hardly a car on the road. 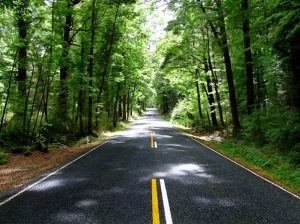 Now, I’m not a cyclist who is afraid of traffic. I’ve ridden in cities from coast to coast, and I’ve never hesitated to  make any move I’ve needed to, like getting in the left lane to make a left turn. In general, car drivers are much better about following traffic laws than cyclists. I just make sure to signal my intentions so motorists know what I’m doing and I follow the same regulations they do. I figure that I won’t give them any reason to be angry at me, such as running red lights or impeding their progress unnecessarily, and everyone will be happy. I hardly ever have confrontations with cars.

And yet, there is a certain tension that comes from concentrating on your line, while avoiding road hazards, when you hear a vehicle approaching from behind. After three or four hours, the mental tiredness of this constant awareness adds a significant amount to your exhaustion. But last Sunday I felt none of that because I had the roads pretty much to myself! And I owe it all to the NFL. Most everyone was sitting inside in front of television sets watching the games, giving me an exhilarating, yet thoroughly relaxing ride. I did not lament that so many people were missing out on a wonderful day. My long-forgotten Utopia had finally arrived.

I don’t watch football, but I’m glad you do.